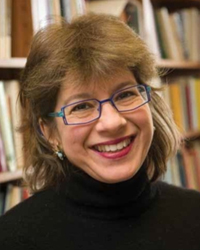 This lecture will explore three intertwined dimensions of relations between African Americans and Jewish Americans:  Jewish involvement in the Civil Rights Movement, Jewish memory of the Civil Rights Movement in recent decades in light of the rise of white nationalism, and scholarship on racism and what they might contribute to our understanding of antisemitism. Many American Jews turn with pride to the active participation of Jews in the Civil Rights Movement (CRM), in which numerous rabbis and Jewish students took part in disproportionate number – and some died. The Black Jewish bonds of the CRM days remain a powerful and inspiring memory, and many Jews long to revive those alliances. To revive the alliances of the past, Prof. Heschel suggests we need to incorporate new understandings of the nature of racism, and recover the prophetic traditions that forged the alliances in the past.
Susannah Heschel is the Eli Black Professor of Jewish Studies at Dartmouth College. Her scholarship focuses on Jewish-Christian relations in Germany during the 19th and 20th centuries, the history of biblical scholarship, and the history of anti-Semitism. Her numerous publications include Abraham Geiger and the Jewish Jesus (University of Chicago Press), which won a National Jewish Book Award, and The Aryan Jesus: Christian Theologians and the Bible in Nazi Germany (Princeton University Press). She has also taught at Southern Methodist University and Case Western Reserve University.
Heschel has been a visiting professor at the Universities of Frankfurt and Cape Town as well as Princeton, and she is the recipient of numerous grants, including from the Ford Foundation, Carnegie Foundation, and a yearlong Rockefeller fellowship at the National Humanities Center. In 2011-12 she held a fellowship at the Wissenschaftskolleg in Berlin. She has received four honorary doctorates from universities in the United States, Canada, and Germany. Currently she is a Guggenheim Fellow and is writing a book on the history of European Jewish scholarship on Islam. In 2015 she was elected a member of the American Society for the Study of Religion.
The author of over one hundred articles, she has also edited several books, including Moral Grandeur and Spiritual Audacity: Essays of Abraham Joshua Heschel; Betrayal: German Churches and the Holocaust (with Robert P. Ericksen); Insider/Outsider: American Jews and Multiculturalism(with David Biale and Michael Galchinsky). She serves on the academic advisory council of the Center for Jewish Studies in Berlin and on the Board of Trustees of Trinity College.