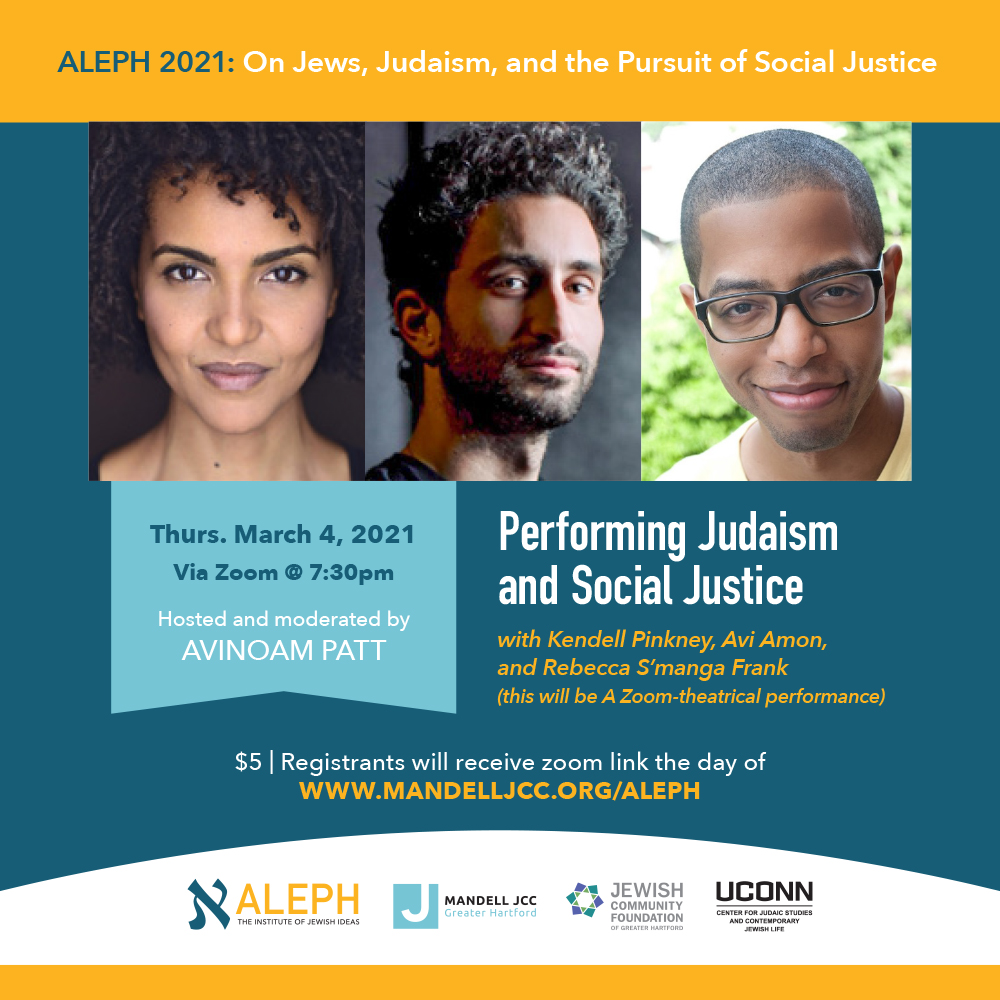 With Kendell Pinkney, Avi Amon, and Rebecca S’manga Frank (this will be a Zoom-theatrical performance)

Rebecca S’manga Frank is an actor, writer, director, and passionate developer of new work. Her credits include projects with the Sundance Institute Theatre Lab in Morocco, the Humana New Play Festival at Actors Theater of Louisville, Berkeley Rep, California Shakespeare Company, New York Theatre Workshop, and she is a founding member of Society – a new repertory theatre company based out of New York. Her TV credits include Prodigal Son (FOX), Elementary (CBS), and an upcoming release on Apple TV+. More recently, she was featured in Paula Vogel’s INDECENT at Oregon Shakespeare Festival. Rebecca holds a B.A. in Creative Writing from Mills College and an MFA from NYU’s Graduate Acting program at the Tisch School of the Arts. This summer Rebecca was commissioned by Hillel International to pen “A Psalm for Racial Justice” for the Days of Awe. Rebecca proudly creates work from a deep love of her Swazi and Jewish roots, and is committed to using her work as a force to advocate for the dignity of Black lives. Rebeccasmangafrank.com

Avi Amon is a Turkish-American composer, sound artist, and educator. Recent credits include: THE COPPER CHILDREN (Oregon Shakespeare Festival), THE FISHERMAN (HBO Films), THE BLACK HISTORY MUSEUM with Zoey Martinson (HERE Arts Center), PAUL SWAN IS DEAD AND GONE with Claire Kiechel (Civilians), WE WERE EVERYWHERE with Shariffa Ali (Princeton), SALONIKA (Berkeley REP) and THE WHITE CITY with Julia Gytri (Yale Institute, O’Neill NMTC), RATED BLACK with Kareem Lucas (New York Theater Workshop). His sound installations in a 100-year old grain silo with Buffalo, NY-based Torn Space Theater were featured at the 2019 Prague Quadrennial. In development: INSHALLAH/MASHALLAH – a 3-D-audio opera re-imagining of the 1,001 Nights (Target Margin Theater), and scores for several films. He is a Jonathan Larson Grant winner, a Dramatists Guild Fellow, and has been in-residence with Exploring the Metropolis at JCAL, Hi-ARTS, Judson, New Dramatists, and Weston Playhouse. Avi is the resident composer at the 52nd Street Project and teaches a variety of collaborative art-making courses at NYU Tisch. www.aviamon.com

Kendell Pinkney is a Brooklyn based theatre-maker, Jewish-life consultant, and rabbinical student at the Jewish Theological Seminary. While he was most recently featured in Saturday Night Seder and on the Crooked podcast Unholier than Thou, his collaborative works have been presented at venues such as 54 Below, Joe’s Pub, the 14th St. Y, and Two River Theatre, to name a few. Kendell’s broader interest in racial and ethnic diversity among Jews led him to team up with spoken-word artist, Vanessa Hidary, to produce Kaleidoscope, a monologue showcase that foregrounds the stories of Jews of Color, and Jews from Sephardic and Mizrachi backgrounds. In addition to his creative arts work, he is the Rabbinic Fellow for the Jewish arts and culture organizations Reboot and LABA, and the Spiritual Director of Ammud: The Jews of Color Torah Academy.