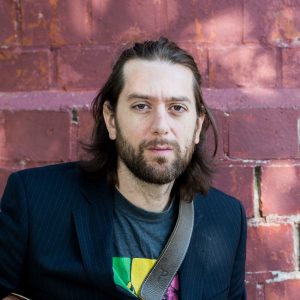 NYC based guitarist and composer George (Giorgos) Nazos from Athens Greece is described in the “Jazz
and Jazz” magazine as a “sophisticated and imaginative player and one of the most creative and nonconformist musicians of the local scene”.

After completing his studies in Political Science and History at Panteion University in Athens, he decided to devote himself completely to music, & moved to Switzerland to study at the Swiss Jazz school of Bern in 2004. George then went to Codarts Conservatory of Rotterdam in the Netherlands, where he received a BA Jazz Performance in Guitar in 2009. He has performed in jazz clubs music stages, and festivals in NYC & around the world.

George is a dedicated guitar instructor with international experience having taught students of all ages and levels and helping them to achieve their goals for the last 15 years. He has taught at Philipos Nakas Conservatory in Greece, a music school that affiliated with Berkeley College of Music, National Conservatory of Athens, Harrison School of Music, Douglaston School of Music, Riverdale Country School & at the Riverdale Y.