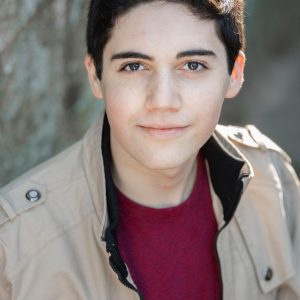 To date, Yanniv has performed in a total of 39 productions, including both plays and musicals. Some favorite roles include Jamie in The Last Five Years (Hunter College), Matthias/Freud/Matthew in The Last Days of Judas Iscariot (Hunter College), and Seymour in Little Shop of Horrors (Riverdale Rising Stars Summer Stock). He has also served as a director on a number of projects, both at the Y and elsewhere, including Summer Stage’s High School Musical Jr. and a new production of Honk! where all of the characters are brought to life as puppets (á la Avenue Q). As a puppeteer, Yanniv specializes in hand puppetry and has trained under the guidance of some of the world’s greatest puppeteers, most notably Martin P. Robinson, Matt Vogel, Stephanie D’Abruzzo (Tony Award Nominee for Avenue Q), and Peter Linz, all of whom are principal puppeteers on Sesame Street.

Yanniv is currently a senior studying Performing and Visual Arts at Macaulay Honors College at Hunter College and is a student in the CUNY Baccalaureate Program through the CUNY Graduate Center. In college, Yanniv has had the opportunity to learn from exceptional artists, including two time Tony Award winner Gregory Mosher, Broadway music director Stephen Purdy, and veteran Broadway dancers Nina Goldman and Germaine Goodson.

As a theatre maker, Yanniv values storytelling above all. The greatest vocals and most impeccable choreography are irrelevant in a musical if they are not serving the purpose of telling a story to the audience. When actors prioritize storytelling and use every aspect of their performance to fuel that goal, the impact that theatre can have on both the audience and the actor, is limitless.